Don’t Go Networking To Get Business 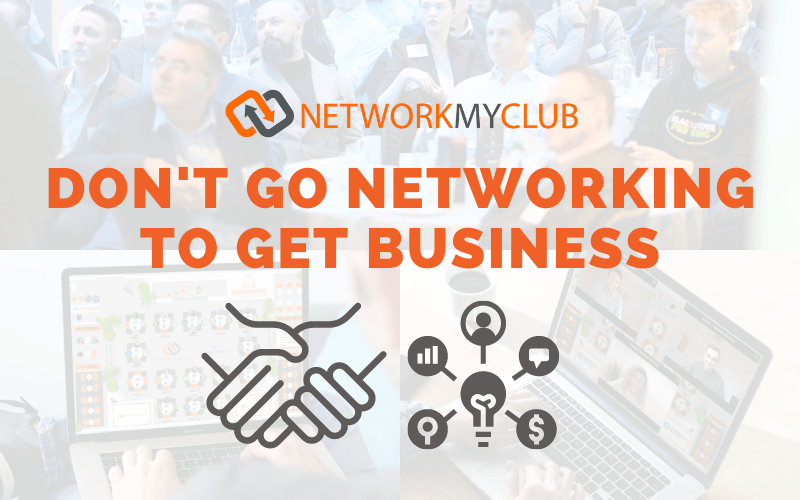 Don't Go Networking To Get Business

by Bradley Hatchett | Founder of Network My Club

By Bradley Hatchett – Founder of Network My Club

Ok, fundamentally that’s why most people do. But hear me out.

This post was inspired following a conversation with leaders of another networking organisation.

We spoke about businesses we see get the most from networking. And what traits and methods they share.

And unsurprisingly (to us) but perhaps surprisingly to some, a common trait we unearthed is those who approach networking with more than going to get business.

For most that’s the end goal. Of course, you want a return from your investment and time (which can come in other forms other than new business – but that’s another post).

But don’t go into it with that mindset at the forefront of why you’re networking.

Doing so sets an expectation and a conscious agenda. You’ll always be thinking of how you can achieve that goal of getting new business.

Instead, approach with the mindset of how you can add value to other attendees and members to help them.

With this mindset it immediately removes that urge you might feel to sell and pitch to people at events.

You won’t look at people as targets. Or write people off you don’t think are ‘useful’ or ‘valuable’ to you.

Networking forms part of your marketing plan. It’s a much more personal and relationship driven approach.

But that shouldn’t mean it’s any faster than other forms. It’s a slow burn.

Team it up with other forms of online and offline marketing, and you have the perfect mix.

Where can you start to begin employing this mindset to networking?

Next time you’re about to step foot into a networking event, stop and ask yourself questions like:

Go to help others, listen intently and be curious. And probably most important – attend consistently.

Then watch as more people try to help you, and your network and new business flourishes as a result.

If you’re a networker that likes to help others and add value to a room. You’re absolutely welcome to come and try out a Network My Club event!

How do you approach your networking?